We reported in part:

There is a case developing involving an active Domestic Terror Group that is so huge and completely disturbing, the Flynn case seemingly pails in comparison.

On November 17, 2020 Michael Mihalakis (a.k.a. Meko Haze) went on You Tube to discuss the murder of Christopher Hallett which occurred on the evening of November 15, 2020.

“Yesterday [Neely Blanchard’s] mother had reached out to me and she told me that Neely claimed that she that Chris [Hallett] and Kirk [Pendergrass] were trafficking children and involved in all this dark shit – it doesn’t sound like that’s true at all – it sounds like Neely snapped because she found out Chris and Kirk were full of shit and not going to get her children back,” Mihalakis said.

Mihalakis operates a You Tube channel that has 3,100 subscribers. In the 22 days since Mihalakis published his discussion on the Hallett murder, the video has had 881 total views. The numbers prove Mihalakis’ channel is almost non-existent and he is almost completely unknown.

Mihalakis has an arrest record – here is his mugshot.

We are investigating his criminal background. 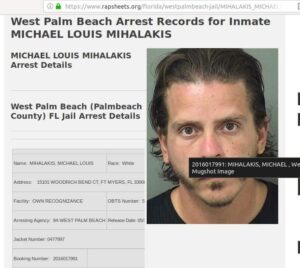 “Neely’s mother said that she had documents in the car showing that they were involved with trafficking children and that that’s why she went and turned herself in in Georgia because she was scared to turn herself in in Florida,” Mihalakis said.

So now…Mihalakis – after being contacted by Susan Blanchard – is starting a rumor that documents were found in Blanchard’s car that implicated Hallett and Pendergrass in child trafficking.

Page appeared on the chat log of the You Tube channel hosted by Hallett’s business colleague and friend, Kirk Pendergrass, and said, Kirk, what evidence was found in Neely’s vehicle.”

So now we have a member of the domestic terror group talking about alleged documents found in Blanchard’s car – the day after the Hallett murder.

Visit the stories below to learn about Page – who and what he really is.

On December 7, 2020 we published the following BOMBSHELL audios and texts that prove Blanchard has already been the target of her own mother, Susan Blanchard, in the past. 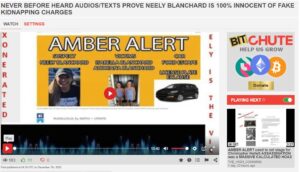 We have more reports coming that reveal the truth about Susan Blanchard.