On November 2, 2020, the day before the 2020 election, Hallett, a Congressional Auditor was doing loss prevention for the U.S. government under consent of Congress when he walked into the U.S. Courthouse in Florida’s Middle District with documents [ARREST WARRANTS].

Two weeks later, on November 15, 2020 Hallett was gunned down in his kitchen.

The report focused on the activities of individuals obsessed with Satanism and/or witchcraft who involved themselves with Hallett.

One of the people featured in yesterday’s article was Alexandria Goddard,  who, as proven by official published documents, before Hallett’s murder, had been carpet-bombing law enforcement, States attorneys, the BAR Association, and others, with demands for Hallett to be arrested and put in prison.

Goddard and many others, including William K. Murtaugh, Florida, had been predicting Hallett’s murder before it even happened. 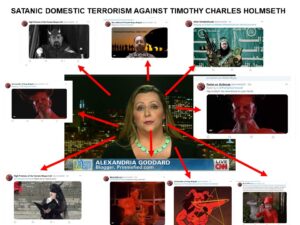 On December 4, 2020 we published Retired truck driver in Florida claims to be FBI investigator – says he “predicted” Hallett murder – announces from his trailer home “Neely Blanchard” is “cooperating”

There exists troves of evidence that Goddard, Murtaugh, and many others are part of a Domestic Terror Group that is planning kidnappings and assassinations. One of the members of the group is Craig Sawyer, CEO, Veterans For Child Rescue. Sawyer threatened to kidnap/murder news reporter and FBI witness Timothy Charles Holmseth.

Today (December 10, 2020), Alexandria Goddard sent a message via Twitter under the address (@prinniedidit) to the Marion County Sheriff’s Office that said, “@MCSOFlorida a thread you should be aware of. Timothy Charles Holmseth and his group are domestic terrorists who are not going to stop until LE shuts them down. Please refer them to the FBI before someone else is killed.” 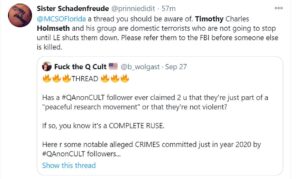 Goddard’s continuous warnings that somebody is going to get killed if her and/or her group’s demands are not met is criminal in nature and violates both State and Federal statutes.

involve acts dangerous to human life that are a violation of the criminal laws of the United States or of any State;

to intimidate or coerce a civilian population;

to influence the policy of a government by intimidation or coercion; or

to affect the conduct of a government by mass destruction, assassination, or kidnapping; and

occur primarily within the territorial jurisdiction of the United States; and

Whoever, with intent to cause the overthrow or destruction of any such government, prints, publishes, edits, issues, circulates, sells, distributes, or publicly displays any written or printed matter advocating, advising, or teaching the duty, necessity, desirability, or propriety of overthrowing or destroying any government in the United States by force or violence, or attempts to do so; or

Shall be fined under this title or imprisoned not more than twenty years, or both, and shall be ineligible for employment by the United States or any department or agency thereof, for the five years next following his conviction.

If two or more persons conspire to commit any offense named in this section, each shall be fined under this title or imprisoned not more than twenty years, or both, and shall be ineligible for employment by the United States or any department or agency thereof, for the five years next following his conviction.