Startling new revelations have now cast, yet, even more doubt, on the true facts and circumstances surrounding the murder of Congressional Defense Contractor Christopher E. Hallett who was shot down in cold blood in his Ocala, Florida home on November 15, 2020.

According to a social media message authored by Hallett not long before his murder, he was tracking “COVID financial source codes” and “shell corporations” around the “globe”.

Hallett was the CEO of E-Clause LLC, a Florida corporation that did loss prevention for the United States government under consent of Congress to identify emoluments violations. Hallett was revealing the methods being used by an international crime syndicate to accomplish nearly any crime conceivable through diabolical “defective practices” within the corporate legal system, which is actually a human trafficking system.

The federal court receipt, which Hallett turned over to a trusted colleague before his murder, proved Hallett filed documents in federal court on November 2, 2020.

The documents then VANISHED!

The official story is that Hallett was murdered by his beloved friend and colleague Neely Petrie Blanchard. Blanchard is now facing First Degree Murder charges. However, our preliminary reports on the Hallett murder show the facts and circumstances, as presented by the media, are extremely SUSPICIOUS. SEE LINKS BELOW STORY FOR MORE ON HALLETT MURDER 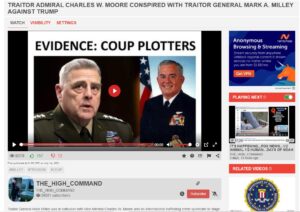 It wasn’t fake – Murtaugh was lying and misrepresenting a federal court clerk (federal crime) in hopes of making the public believe the files never existed; because, the files may show a MOTIVE for Hallett’s murder that does not link to Blanchard.

The validity and existence of the Hallett receipt was confirmed by Florida Attorney Charles Baron. Baron was retained by investigative journalist Timothy Charles Holmseth to search for the receipt in the federal records.

Baron determined the receipt was valid but the files could not be found.

“Hi Timothy – The Clerk’s Office at the Ocala Division of M.D. Fla. (deputy clerk named Lynn) did a thorough search in their system using the receipt number, and search various ways,” Baron said.

Sawyer is presently under investigation by the U.S. Army at Fort Campbell, Kentucky and U.S. Navy for kidnap, torture, rape, beastiality, and death threats he, and operatives of Veterans For Child Rescue Inc.,  made in writing against the owner/publisher of www.timothycharlesholmseth.com Randi Erickson, Holmseth, and children.

Examples of death threats and CIA terror ops by Sawyer are becoming to numerous to report.

Sawyer’s operative Ashely Cooper Brown, Two Harbors, Minnesota, created a wildly ridiculous  fake story that Publisher Erickson and Reporter Holmseth traveled to Two Harbors and attempted to talk to Cooper Brown’s child in a park. Then, based upon the lie she made up about Erickson and Holmseth – Cooper Brown threatened to “execute” Erickson and filmed herself traveling toward Anoka County, Minnesota where Erickson has a home.

Erickson has filed a Complaint to Two Harbors Police Department against Cooper Brown for terroristic threats and filing a false police report.